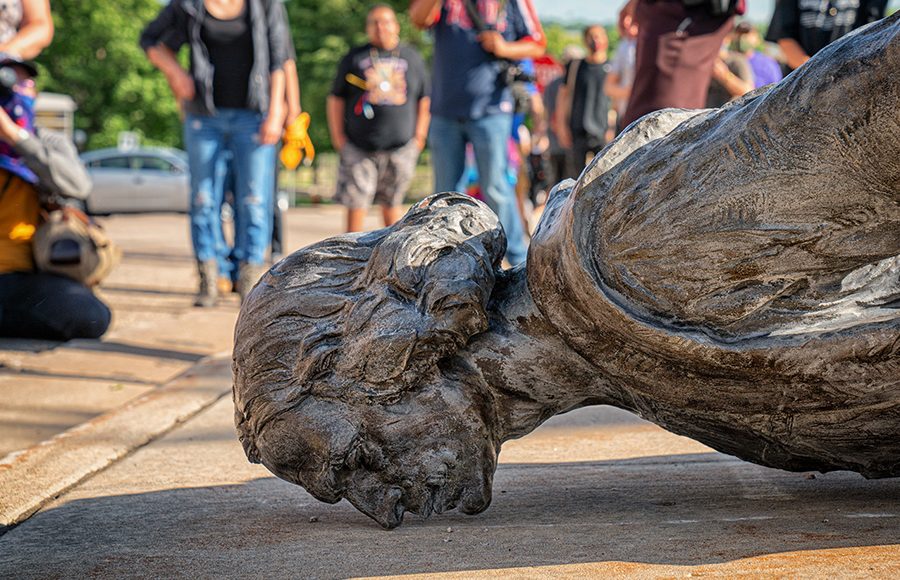 This BK & SG Talk will be streamed live from the Oostserre and can be followed via this link. A limited number of students who have access to the building on Thursday can attend the BK & SG Talk in the Oostserre. They can request attendance via the email address publicprograms-BK@tudelft.nl. First come, first served.

Buildings, museums and monuments can be manifestations of national pride and glory, but also increasingly confront us with our problematic past. These symbols tell stories of conquest, victory and heroism, while simultaneously representing narratives of repression, racism or even genocide, the latter part not being included in the dominant memory culture.

Recent discussions and several incidents where statues of controversial historic figures were torn down demonstrate that contested heritage is once again on the forefront of the public debate. Should we preserve, demolish or contextualize? Is it possible to redesign and redefine material heritage that brings up so many painful memories? Can we add new layers of meaning, allowing us all to develop a deeper understanding of our often difficult past? Or should we erect counter-monuments, rethink architectural practices and claim new heroes? During this panel discussion, organised in collaboration with Studium Generale TU Delft, we will focus on several case studies that one way or the other play an ambiguous part in our collective memory. Through these individual examples we seek to find a shared language and common understanding of the issue, and offer a sustainable and inclusive contribution to the public debate on contested heritage.

Nancy Jouwe (Delft, 1967) studied Genderstudies and Cultural History at Utrecht University and York University (UK), and is interested in intersectionality, postcolonial and decolonial theory. She worked as the executive director of Foundation Papua Cultural Heritage and Kosmopolis Utrecht. Currently she is a freelance researcher, public speaker and lecturer at Amsterdam University College and the University of the Arts in Utrecht. She (co-)published articles and books on postcolonial cultural and social movements and the Dutch history of Slavery, her work has been published in Dutch, English, Russian and Indonesian. Titles include Caleidoscopische Visies. De zwarte, migranten, vluchtelingen vrouwenbeweging in Nederland. (2001), Paradijsvogels in de Polder. 50 jaar Papoea’s in Nederland (2012), Gids Slavernijverleden Nederland, Netherlands Slavery Heritage Guide(LM Publishers, 2019) and Amsterdam en de slavernij in Oost en West (Uniekboek/Spectrum, 2020). She is the chair of BAK Basis voor Actuele Kunst and co-chair of Mama Cash-fund for women.

Karel Loeff (1969) is director of Erfgoedvereniging Bond Heemschut, one of the oldest and biggest private heritage organizations in the Netherlands, with 5000 members and 150 volunteers. Heemschut is advocating since 1911 for the protection of built heritage and cultural landscapes. Karel is trained as an architectural historian and specialized in industrial heritage. He is council-member of Europa Nostra, the voice of Civil Society committed to Cultural Heritage in Europe. In his hometown Laren is is councilor and group chairman for the biggest local party.

Koosje Spitz studied History at the University of Groningen and the University of Iceland and holds a Master degree in World Heritage Studies at the Brandenburg Technical University, in Germany. She worked as a project coordinator at the Centre for International Heritage Activities. In 2012 she started working as a policy officer at the Netherlands Commission for Unesco. She was the local coordinator of the ICCROM course ‘First Aid to Cultural Heritage in Times of Crisis’ in Amsterdam in 2015. Hereafter, she started working at the National Museum of Antiquities and DutchCulture. In 2016 she returned to the National Unesco Commission as advisor Heritage & Culture. She advises the Dutch government on the implementation of the Unesco Conventions, in particular the World Heritage Convention and the 1970 Convention against illicit trafficking. She coordinates various projects relating to conservation, safety and security issues. In close collaboration with Blue Shield NL, the National Agency for Cultural Heritage and the Prince Claus Fund she works on establishing national and international (coordinating) structures and capacity to support a more rapid cultural emergency response.

Aleksandar Staničić is an architect and Assistant Professor at TU Delft Faculty of Architecture and the Built Environment, the Chair of Methods of Analysis and Imagination. Previously he was a Marie Curie Postdoctoral Fellow at TU Delft, research scholar at the Italian Academy for Advanced Studies, Columbia University, and postdoctoral fellow at the Aga Khan Program for Islamic Architecture at MIT. Aleksandar’s work stems from two book projects, War Diaries: Design after the Destruction of Art and Architecture (co-editor, University of Virginia Press, 2020) and Transition urbicide: Post-war reconstruction in post-socialist Belgrade (sole author, forthcoming). His is recipient of multiple grants and fellowships from the Graham Foundation, the European Commission, Government of Lombardy Region, Italy, and Ministry of Education, Republic of Serbia.

Marina Otero Verzier is an architect based in Rotterdam. She is Director of Research at Het Nieuwe Instituut (HNI). At HNI she leads Memory and Oblivion, a long-term research project on ideology, memory and monuments. In the autumn of 2020, and as part of this initiative, Het Nieuwe Instituut embarked on an editorial project, lecture and film series organized in collaboration with e-flux Architecture, titled Monument. Marina was the curator of “Work, Body, Leisure,” the Dutch Pavilion at the 16th Venice Architecture Biennale (2018). Previously she was Chief Curator of the 2016 Oslo Architecture Triennale together with the After Belonging Agency, and the director of Global Network Programming at Studio-X- Columbia University GSAPP (New York). Marina is a co-editor of Unmanned: Architecture and Security Series (2016), After Belonging (2016), Architecture of Appropriation (2019), More-than-Human (forthcoming, 2020), and editor of Work, Body, Leisure (2018). Since September 2020, Marina has held the position of Head of the Social Design Masters at Design Academy Eindhoven.

This edition of BK Talks is brought to you by the Faculty of Architecture and the Built Environment and Studium Generale TU Delft Credits image: By Tony Webster – https://www.flickr.com/photos/diversey/50000129917/