These are interesting times to be a scientist or an engineer. On the one hand, we consider what ‘science’ says to be true, hardly without a second thought. On the other hand, some people are skeptical and argue that science is ‘only one perspective’ among many others. The Trump administration has cut funding to several prestigious research programs, and among the general population esoteric doctrines are popular as ever. What to think of this situation?

Whatever your opinions are on these matters, it can help greatly to have a clear story on what science is. During this book club series we will study the enormously influential The Logic of Scientific Discovery by Sir Karl Popper in an attempt to provide such a story. Popper argues that science will not acquire certainty, that falsification of statements is a much better criterion than verification, and that theories which might fail are better than theories which cannot. We’ll try to find out why this is so.
The book will also present a great opportunity to reflect and deliberate on the ‘scientificness’ of the study programs at the TU Delft, and the development of the philosophy of science after Popper with its emphasis on paradigms (Kuhn) and indeterminacy (Quine).

Main questions we’ll discuss are: ‘what makes a statement scientific?’; ‘why can we not verify that gravity exists?’; ‘does science describe reality or merely produce prediction?’; ‘what do words like verification, falsification, induction, deduction, etc. mean?’ and ‘what room does science according to Popper leave for religious belief?’. Also it will be proven that, scientifically speaking, the earth does not revolve around the sun.

The book club is open to anyone who has or does not have a story on the nature of science, and also everyone else. There is free lunch too.  Register for the whole series of four interactive meetings by sending an email to SG @ tudelft.nl (without the spaces).

The dates and times are as follows:

In the Einstein room in the Library.

We’ll need a minimum of 5 and maximum of 15 participants, so sign up quick! 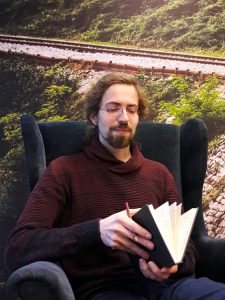 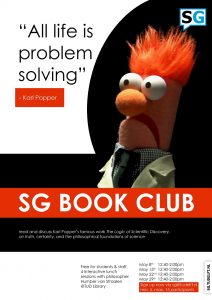