In 2014, there were over four hundred Indian students at the TU Delft, second only in number to Chinese students in the ballooning population of internationals. There is an active student’s association, ISA, representing Indian students and organizing cultural activities and parties from Diwali to Holi. And now for the first time there has been a joint event organized by ISA, SG, and S4S, to highlight the cultural differences and similarities between engineering in Europe and in India.
And why not? Know thy neighbor, I always say (I don’t actually know my neighbors).

A university is a great place for cultural exchange. And with four hundred Indians walking around and working on this campus, it serves us as a community to get to know each other. And who better to facilitate that than those who know both cultures: students who have done projects abroad in India, and Indian students who have worked and studied at home as well as in Europe.

The “Indian Expedition” event, hosted by local celebrity student Nitant Shinde from Aerospace, introduced four speakers. First up was Maarten Duijnisveld, former chairman of S4S, who traveled to India in early 2014 to set up projects for Delft students through the Amrita University in southern India. Second was Mick, who with two fellow students is traveling to India in November this year to complete one of those projects. Specifically, they are going to use solar energy to give a much-needed boost to the local production of lemon grass oil in the rural south. The third speaker was Brian Baldassarre, an Industrial Design student who went to India in 2013 with his group to redesign the handlebars of the local rikshaws in Varanasi to offer more comfort to the drivers. Fourth and last was Vidyut Mohan, who together with his American partner went to the rural north of India to develop a biofuel industry, by turning pine needles into fuel through a process known as torrefaction. There is an enormous excess of pine needles in government-planted forests and a lack of jobs as well. So here’s to hitting two birds with one stone.

Each of these projects met with different challenges, successes, and failures because of the cultural divide, as became clear in the stories these students shared. You can still get an impression of their stories from their presentations, which you can see by clicking on the images below.

Interesting fact: of the over four hundred Indian students in Delft, less than ten made it to this event. Why so few? Your theory is as good as mine, but it’s clearly something SG has to work on in the future. 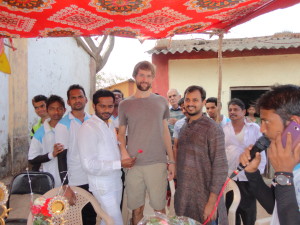 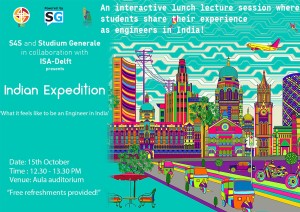 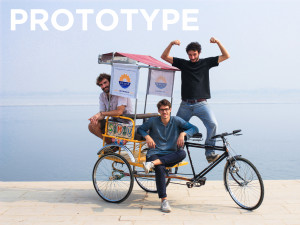 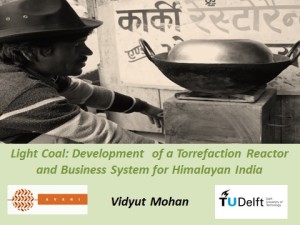